​Honoring The Service of Black Veterans 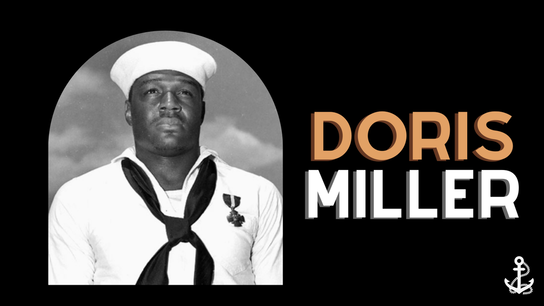 ​​In honor of Black History Month, we want to honor the life and service of Dorris Miller.  He was born to sharecroppers in Waco, Texas on October 12, 1919.  As a young adult, he acted selflessly to provide for his family, dropping out of school to keep his family afloat. He worked as a cook during the Great Depression and enlisted in the United States Navy shortly after his twentieth birthday.

"On December 7, 1941, Mess Attendant Second Class Doris Miller was collecting soiled laundry just before 8:00 A.M. When the first bombs blasted his ship at anchor in Pearl Harbor, Miller went to the main deck where he assisted in moving the mortally wounded captain."(Cultural Arts of Waco)

Dorris Miller lived during a time when segregation shaped the social landscape within the armed forces.  He served a country that purposefully discriminated against him.  Black men received training that put them at a disadvantage during combat.  Despite it all, they rose to the occasion.  When the bombs dropped, Dorris Miller put himself on the line to return fire to planes attacking the harbor.

"It was Miller’s first experience firing such a weapon because black sailors serving in the segregated steward’s branch of the navy were not given the gunnery training received by white sailors."(Cultural Arts of Waco)​

It took true bravery and commitment to even attempt to defend a Navy ship using unfamiliar weaponry.  His actions proved that segregation and racism weakened the American Amed Forces during one of the country's darkest hours.  Dorris Miller survived Pearl Harbor and continued to serve in the Navy for the rest of his life.

"During the battle of the Gilbert Islands, on November 24, 1943, his ship was torpedoed and sunk in the Pacific Ocean, and Miller perished. At that time, he had been promoted to cook, third class, and probably worked in the ship’s galley. In addition to conferring upon him the Navy Cross, the navy honored Doris Miller by naming a dining hall, a barracks, and a destroyer escort for him. The USS Miller is the third naval ship to be named after a black navy man." (Cultural Arts of Waco)

Americans cannot honor Black servicemen and women without acknowledging the uphill battle placed before them.  Dorris Miller served in the Navy despite systemic racism within the training programs.  Many Black service men and women did the same, selflessly giving their lives for a country that would not defend their right to equal protections under the law during their lifetimes.  Black History Month may be coming to a close but we should not have to wait until February to acknowledge the amazing contributions from Black service people whose contributions helped to guarantee the freedoms we all enjoy.